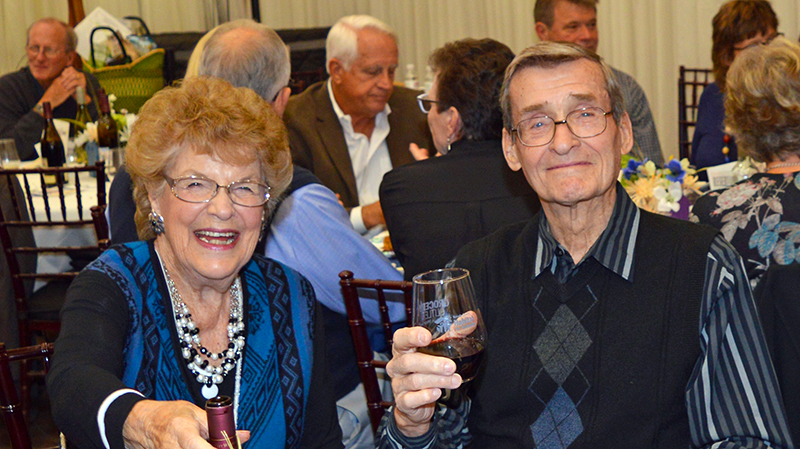 It all began for Marilyn Hopkins with the gift of a book.

“My sister and brother-in-law were good friends with Millard and Linda Fuller,” Marilyn says. “She would tell me stories of the great things the Fullers were doing. I listened with interest but I wasn’t really moved. One day she gave me one of the books Millard had written.”

Marilyn (seen above with husband, Don, at Street of Dreams) says she put the book on a shelf and really didn’t give it much thought. But she began noticing the places her sister and brother-in-law were going on behalf of Habitat, and how the Habitat mission was spreading throughout the country. “You know, every time I walked by that bookcase, that book just seemed to call out to me. So one day I finally sat down to read it and I was hooked!”

Hooked she was! Inspired by the stories of changed lives and the Christian-themed approach, Marilyn got involved. It led her to having a part in forming Habitat affiliates in Placer and Siskiyou Counties. But her heart was in her hometown of Grass Valley.

“When we first broached the subject of forming a Habitat affiliate here, Grass Valley wasn’t quite ready, so we focused on Placer County first.” Within a year the timing was finally right and she, along with Dave and Jessie Emanuel and other forward-thinking volunteers, formed the Nevada County Habitat affiliate in 1996.

Marilyn didn’t join the Board of Directors until the following year, but since then she has been a vital presence within the affiliate. Over the years she has served as president of the organization twice and has been a member of other committees. She currently serves on the Board Development committee, charged with developing relationships with members of the community who can apply their knowledge, talent and leadership abilities in ensuring the Habitat mission continues now and into the future.

“I take great joy in knowing that other people feel like I do about the Habitat mission,” she says.  “It just seems like the right people have always shown up exactly when we needed them. In those early days we just had to lean on our faith many times until they showed up, or we stumbled across them.” She said with a laugh, citing that someone like Frank Sobrero, Nevada County Habitat’s construction supervisor, was one of those people. “That was a wonderful day when Frank joined us. He caught the Habitat spirit and over the years he has inspired so many others.”

The other moment in Nevada County Habitat’s evolution that she recalls fondly was when the organization hired its first executive director.

“That was the greatest day! We all collectively heaved a huge sigh of relief! We all had carried the organization as far as we could take it, and we knew we wouldn’t expand and grow until we had professional leadership. That meant we also had to take a step back and let the people we hired do the job. That’s not always easy, but there was no way we could reach that higher level unless we did.”

Since then the organization has grown to employ 15 people, operate a very successful ReStore, and will complete construction on its 40th and 41st homes in 2021. “I am so proud of this affiliate,” she says. She’s also grateful that the original spirit of Habitat has been maintained.

“Millard Fuller’s books inspired us and helped us to believe. There are so many examples of how God’s hand has been on Habitat. I’m so happy that we can continue to contribute to this wonderful mission.”

For that, and for so many other reasons, Nevada County Habitat is grateful that Marilyn heeded the call, and read the book gifted to her from her sister.

“The spirit of Habitat is contagious,” she says. “It will change your life – and the lives of so many others.”