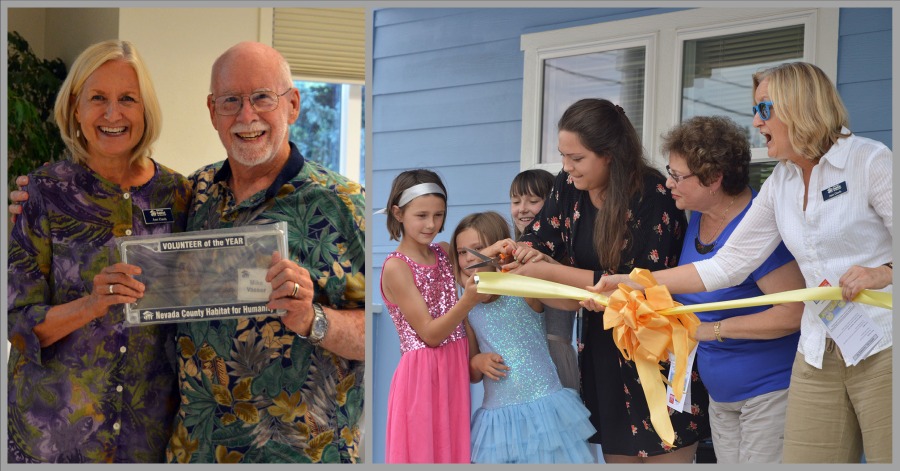 In recent months the Habitat staff has been poring over our library of photos for a number of projects. The very familiar and friendly face of Ann Davis can be found in a good number of those photos. And for good reason – Ann has been committed to the Nevada County Habitat mission for over two decades.

During her relationship with Habitat she has served in just about every volunteer role Habitat has to offer, including being President of the organization.

Her tenure began when she was recruited as a Board member. As she began learning all of the details that go into Habitat’s mission, the people that shined most brightly for her were the Habitat homeowners.

During her career as a pediatric physician assistant her final clinical stop was a center that took care of children who were eligible for Medi-Cal. There her understanding of the connection between having a safe, decent and affordable home and well-being deepened. So, it was no surprise that Habitat’s emphasis on helping families achieve healthy homes touched her heart.

As her time neared to leave the board, she and fellow volunteer, Mike Vasser, formed the Homeowner Support Committee for Habitat.

“I just love working directly with homeowners,” Ann says. “It continues to be inspiring to hear their stories of perseverance and hard work – their willingness to keep trying to create the best outcomes for their families. They show a lot of courage, and I am honored to work with them.”

When she and Mike first began they didn’t really know what it would entail. But now, 20 years later, it has become a part of the heartbeat of the organization – and is vital to the success of families becoming new homeowners.

“People think that once they have the house the job is done,” she says. “But, as all homeowners know, there is a lot of continuing education that takes place year to year. We are there to help with that the best ways possible.”

In 2020 Homeowner Support initiated two vital communication links for current homeowners – a quarterly newsletter and a dedicated website. The Homeowner Support team provides homeowners with information ranging from landscaping tips to how to shop for insurance. While this new outreach has been extremely effective, the heart of Homeowner Support are the direct relationships.

“One of the most fulfilling aspects of being a part of Homeowner Support Committee is that we hear the reports of how strong the bond is that was created between our homeowners and their homeowner partner. Many have maintained friendships for many years after the official time period of support elapsed. I think those of us on the committee get as much out of these relationships that the homeowners receive. It’s pretty special.”

Ann continues to serve as the Chair of Homeowner Support. But her volunteerism doesn’t stop there. An excellent cook, Ann shares her culinary expertise by bringing lunches to the construction team twice per month. She was also instrumental in helping plan the Priced Out! Women, Children and Housing town hall this past March.

Ann has been a recipient of Nevada County Habitat’s Rock Award and the Joan Lancaster Award. “There just aren’t enough awards in the world to express our gratitude for Ann,” says Executive Director, Lorraine Larson, “She is truly a needle in a haystack and absolutely essential to our mission!”

When asked what she’d like to see Nevada County Habitat do in the future, Ann said, “Continue on the same trajectory we’re on right now. Habitat truly depends on three things: money, volunteers and land. We always need to be diligent in those three areas.”

With Ann providing an exemplary example, and the dedication shown by the other Homeowner Support team members, Habitat will be sure to maintain its steady course.

Note: There are currently volunteer openings within Homeowner Support and other Habitat committees. If interested in joining the Nevada County Habitat volunteer team, visit our Volunteer web page to learn more and fill out our online form.