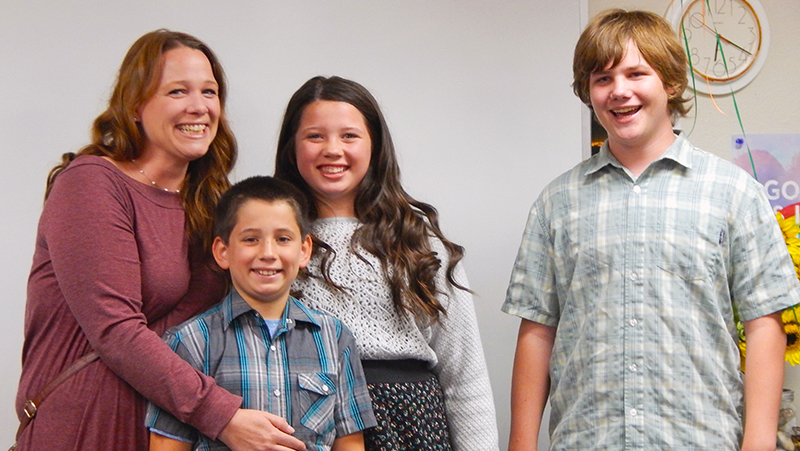 When Sharon Reid was notified she would become Habitat for Humanity’s newest homeowner, it was an “unexpected light.” This light was much needed.

A hardworking single mother of three, Sharon’s life hasn’t been easy. After her divorce she bought a well-used mobile home, thinking this would be a more permanent solution than renting an apartment. However, during the four years she has been in the mobile her space rent has escalated – and because of the age of the mobile, numerous problems have surfaced that have made the home barely livable.

“We discovered that there are water leaks and major problems with the wiring,” Sharon says. “I’m so afraid that one day a fire is going to break out.” She went on to explain that she barely has money enough to make basic maintenance repairs after paying space rent and meeting her other basic obligations. “At one point we also had a rat infestation. They’d chewed through the floor. I literally had to throw out almost everything we owned, scrub and disinfect the entire mobile, and essentially start from scratch.”

Even as they have dealt with this and the loss of a loved one, Sharon and her kids have done their best to make good on a bad situation – maintaining as best as possible, even creating a small palette-garden.

These challenges might make one give up. Not Sharon. Like so many single mothers, her children are her focus, and she wants them to have a normal, better life. She currently works full-time as an aide at a local preschool. After work she picks up her kids and drops them off with her mother, and then she drives to Rocklin to attend classes at Sierra College. She’ll soon earn her Associates Degree in Child Development, along with a certificate enabling her to teach preschool. Her ultimate goal is to earn a BA in Sociology and then earn a Masters in Social Work.

“I always felt like education was my bright star at the end of a dark tunnel,” she said. After graduating from Nevada Union in 2000 she started a nursing program, but had to quit when she had significant complications during her pregnancy with her first child. She eventually returned to school, but has been able to only take a class or two at a time because of her need to care for her children and to work. But she won’t ever give up.

“It’s been very hard, but I can see one light (education) getting closer. I never dreamed having a Habitat for Humanity home would be possible – but it is! We’ve been provided a surprise light! “Just knowing I’ll have a safe place to call home, where I can hear my children laughing and playing in the back yard, my heart is filled with gratitude.”