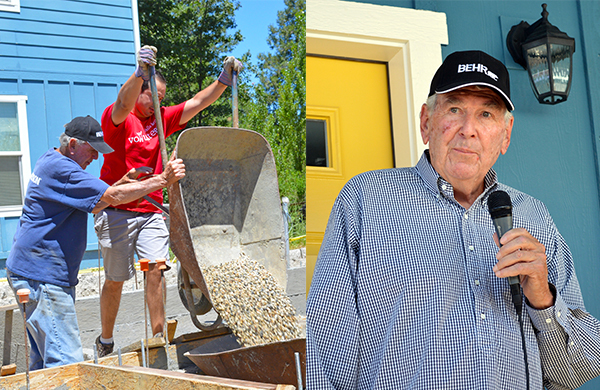 In 2002 Frank Sobrero was attending mass at St. Patrick’s. After the service he was pulled aside by Ann Moore, a board member for Nevada County Habitat for Humanity. She told him he should volunteer for the charity. He followed her advice. Today, Frank volunteers as the NCHFH construction supervisor, and has had a hand in building 32 of NCHFH’s 34 homes.

“We are bringing value to the community,” he says. “Especially to people who can’t afford the average apartment, much less a house. I think our entire construction team feels that way. It’s why we’re out there.”

After having spent much of his career with AT&T in operations and sales management, Frank had picked up some trade skills, but had never built a house. Over the years Frank acquired the skills and knowledge of what it takes to build a quality home and manage the building process from the ground up.

‘Frank’s project management skills have been of immeasurable value to us,” said Lorraine Larson, NCHFH Executive Director. “We are blessed to have him in this role.”

Over the years Frank has developed excellent relationships with NCHFH’s suppliers and city/county officials – vital to moving the building process forward. The other factor that moves the process along is having people who know their role when they show up on-site.

“We’ve got a great team of people,” He said the core crew members have been together for over 10 years. While the team includes a number of skilled tradesmen, it also includes a retired pharmacist and school teacher. “People come from all walks of life. The common denominator is that we want to contribute to our community, making sure deserving families have a safe place to call home.” He says the look on the faces of the families as they take their first steps into their new homes is all the reward he and his team need to keep them going.

“I’m proud of the homes we build. We don’t cut corners. We take the extra steps to ensure the best quality possible. When we’ve finished, the team gathers inside the home before the dedication – and we all agree that this would be a home we could live in. That says it all.”