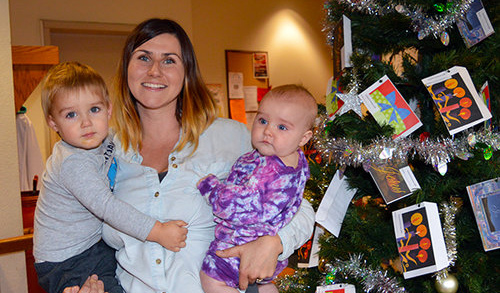 When Amanda McIntyre moved into her Habitat home several years ago, she thought this would be her forever home. A single mother, working as a Certified Nurse Assistant and well on her way to becoming a Registered Nurse, Amanda felt like her new home was a gift from God for her and Jordan, her son.

Jordan suffers from cystic fibrosis. They had been living in a 500sf apartment in a 100-year old Victorian. Through the combination of old pipes, inability to set room temperatures and chronic mold, Jordan’s health was deteriorating. In addition, because she worked around people with illnesses all day, Jordan’s Pediatrician recommended she quit her job to avoid challenging Jordan’s immune system further. She did, becoming Jordan’s permanent caretaker (which cut her income by two-thirds). So, when Nevada County Habitat for Humanity advertised for new home applicants, she was quick to respond – and she was selected. She and Jordan eventually moved into their new three bedroom, 1,200sf Habitat home. Jordan’s health began improving immediately while Amanda’s cost of housing was significantly reduced.

“That was the first real accomplishment in my life.” Amanda said. “It felt permanent and solid.”

Amanda’s first priority was to ensure Jordan had a stable and healthy place to live – something Amanda didn’t experience as a child. From the time she was five years-old Amanda was a foster child. Up until she “aged-out” she had lived in 17 foster homes. This instability left some scars that she has been able to heal through hard work and strong faith, and by achieving home ownership.

But, as she said, “Our plans aren’t necessarily God’s plan for us.” After moving into her new home her life began to change – in monumental ways. She met and fell in love with Carl. They married and had two children together, Jacob and Jackson. It wasn’t long before it became clear they would need more space.

Amanda thought ahead. She and Carl had been adding extra to their monthly mortgage payment, to build equity faster. They found an ideal home for their growing family, with an owner who was willing to work with them. They had been saving for over two years, and were able to put a down-payment on a larger home.

“I am so thankful to Nevada County Habitat for Humanity,” She said, fighting back tears. “Through Habitat I was given the tools and opportunity to succeed and the stepping stone to advance our lives. My Habitat home was a real, solid and safe place for me and my family. Moving on is scary. But, I know that being uncomfortable just means I’m growing.”

She and Carl serve as the volunteer youth pastors at their church. She says the foundation of having a supportive church family has added to her strength. Amanda says that through her deep faith she’s found the courage to trust God in this journey, feeling that “He set this new home aside for us.”

As she and Carl were cleaning and preparing their Habitat home for the new low-income homeowner, she says an extraordinary peace came upon her. “I realized that by us moving forward we’ve opened an opportunity for someone like me (a single mother) to have a safe, secure home to raise her family.”

She also said that in their new home (five bedrooms) there was enough room for her and Carl to become foster parents to a deserving child in need. “I know how that feels. God is calling us to something higher. Now we have the opportunity to give back in a significant way. I am so grateful for that.”