The Habitat Difference: Before and After 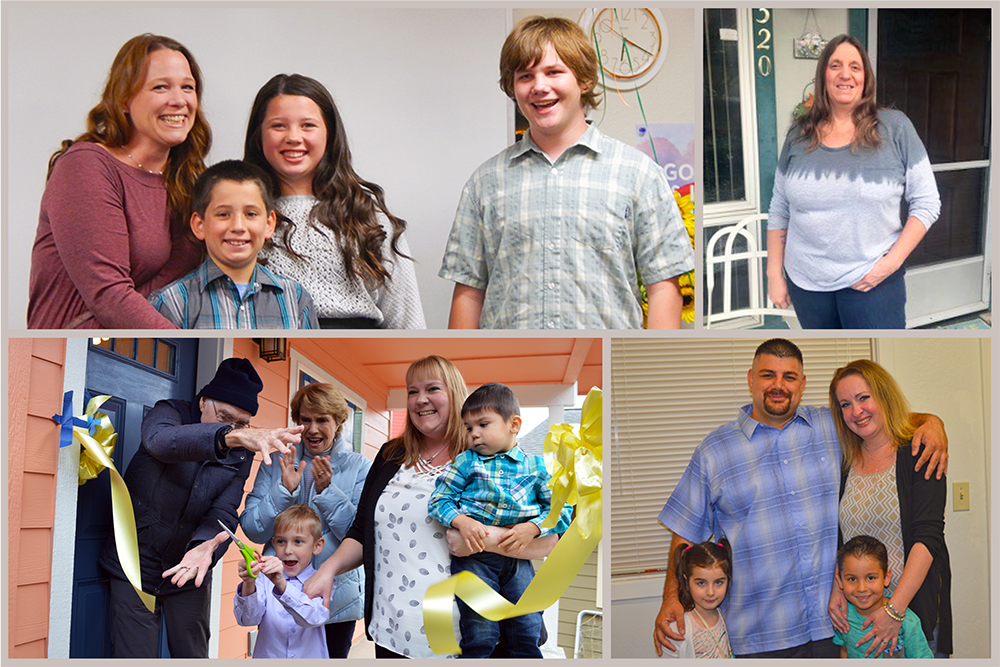 How much of a difference does having a safe, decent and affordable home have on the economic condition and quality of life of essential workers in our community have? Plenty! Take it from four owners of Habitat for Humanity built homes.

Many economists say that the difference between living in poverty, with constant housing and food insecurity, is $500 per month. They say this amount of money provides enough difference to improve long-term quality of life. This is the first difference a Habitat home can have on a family.

When Nicole moved out of her three-bedroom apartment into her new Habitat home in the Heritage Oaks neighborhood in 2018, she was paying $950 per month for rent. Today that same apartment rents for $1,895 per month…and her mortgage payment (plus impound) is less than what she paid in rent three years ago.

“It’s kind of shocking,” She said. “My mortgage payment is less than what people can rent a room for today. I’m so grateful for Habitat.”

Mike and Tommi, Habitat’s newest homeowners, have had a similar experience. In December 2021 they left behind a sub-standard, mold-infested two-bedroom apartment for their Park Place home. They are now paying nearly $300 per month less for their mortgage versus rent. “Even though it’s only been two-months, it’s amazing what a difference $300 a month makes!” Tommi said.

For Tammy, Nevada County Habitat’s first homeowner, the long-term benefits of home ownership have meant having the ability to invest in her home. Tammy took the keys to her Penn Valley home in 1999. The savings she has experienced over the two decades since moving in have meant being able to make sensible home repairs as needed…and improvements. “Last year I re-did my kitchen. New appliances, laminate flooring and new paint. I’ve gone from feeling so insecure about where I would live (20 years ago), to investing in my home. It’s such a different mind-set.”

For Sharon the economic difference has come in the form of drastically reduced energy costs. Prior to taking the keys for her Slate Creek home she lived in a run-down mobile home. Using duct tape to close seams around the cheap single-pane windows, her PG&E bills would range between $300 and $800 per month. As a single mother working for a local childcare provider, she sought every type of public assistance possible.

“I had to look for every opportunity to make ends meet,” Sharon says. There wasn’t money for any extras – it was a struggle month to month to make sure her kids had shelter and food. That all changed in 2019 when she received the keys to her Habitat home.

With her new mortgage slightly less than what she was paying in rent, Sharon says the real difference came from now having a well-built home with solar. “My electric bill is $35. Even with paying for other utilities, I’m still paying way less.”

It’s About the Kids

With her month-over-month savings, Sharon’s kids have a new life. When they lived in the mobile home her daughter couldn’t invite friends over to play or to have a sleep-over. “The condition of the mobile was not only embarrassing, it wasn’t safe. The electrical was so bad that I was afraid of having a fire.” She says. Since moving into her Habitat home, Liddy, her daughter, has not only had sleep-overs, but Sharon has hosted many family get-togethers. “My home is now a place where we can experience the milestones in life. That’s something special.”

The financial predictability has also allowed her youngest son to play football, while Liddy is on the wrestling team and will soon start track and field. “As a single mom, receiving public assistance, there’s no way I could have ever afforded these extra-curriculars for my kids. I now get to say ‘yes’ to things. It’s such a change!”

Tammy has had a similar experience, but for her grandchildren. As the guardian for three of her grandkids, Tammy has been able to provide a safe space for them to grow. She’s also been able to afford to have her oldest grandson participate in martial arts classes and basketball.

“If not for this home, I’m not sure where my grandchildren would have gone. If I were still in an apartment it would not have worked. I’m very grateful for that.”

Besides the economic benefits affordable home ownership provides, children’s health and safety are the number one reason why families seek the Habitat opportunity.

“The biggest benefit to our home is my children have a safe neighborhood to go outside and play. They have friends. (Here at Heritage Oaks) we all look out for one another’s children. It’s definitely helped reduce anxiety.”

“My kids can go out and ride their bikes, and I don’t have to worry,” Tommi says. At their apartment it was actually dangerous for her kids to go outside and play. It was common for used hypodermic needles to be strewn in the parking lot. “It’s just surreal the difference!” Tommi said.

She went on to say that there has also been a pronounced health benefit for her son, Hunter. “His allergies were terrible due to the mold in the apartment,” She says. “They’ve improved ten-fold since moving into our home.”

Housing insecurity is a very real thing. Rent increases, the fear of being a missed paycheck away from being homeless, uprooting kids in the middle of a school year. These are all thoughts that plague parents who live in less than ideal circumstances, and are often paying more than 50% of their income toward housing. A Habitat home cures this anxiety.

At one point, Nicole moved five-times during a two-year period to off-set rent increases. “I have more control over my life now,” Says Nicole. “This is a forever home. I never have to move again.”

“I haven’t had housing insecurity for over twenty years now,” Tammy says, whose mortgage will be fully paid in just a couple of years. “I feel so fortunate to have this, especially now that my grandkids are with me.” Tammy said.

For Tommi, it’s about the things many of us might take for granted. “I can do laundry now!” She says she’d much rather pay a water bill than haul her laundry to the laundromat and feed quarters into a machine. With two growing kids it makes a difference. “Just to have the freedom to do things in our home is life-changing. We enjoy barbecues now. My kids have less anxiety because they have their own space. Trust me, that has brought peace!”

“Before, there was never a finish line,” Sharon says. “Now I can look to the future and see the point where my mortgage will be paid off.” She says being a homeowner has also given her more confidence. Since moving into her home, she has completed her Associates degree and recently landed a job at the County as an eligibility worker. “I now have insurance for all of my kids!

“I’m grateful for the opportunity to own my home through Habitat. We’re happy. The anxiety is gone. And I’m no longer on any public assistance. Being self-sufficient is a milestone that makes me very humble and proud.”