A Model of Positive Perseverance

For so many, life often deals a tough hand from the beginning. Some can never get past their circumstance, but others, like Lanea, not only survive but forge a life of meaning and purpose. With her infant daughter, Nova, in tow, she has done just that.

Lanea was born with neurofibromatosis, a genetic condition in which a tumor grew upon the nerves on the right side of her face. The first signs showed up when she was two years old. The spontaneous mutation caused the right side of her face to develop differently than other children. She had her first surgery when she was five years old, and has had seven surgeries overall – with more to come.

A lifelong resident of Grass Valley, she attended elementary school here. That’s when the bullying began. 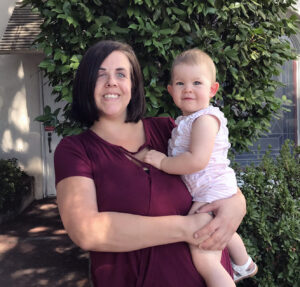 “It began with name calling,” Lanea says. “And it got worse from there.” The bullying caused her to suppress her natural tendencies to be energetic and outgoing. A turning point came when she was 12 years old riding the bus to school. From behind her another child began the bullying talk. Lanea turned to the offender and dressed him down in front of all the other children on the bus. “I’d had it. I remember telling him he needed new material because I’d heard it all before,” she laughed as she recounted the incident.

Unfortunately it didn’t stop. When she got to Nevada Union High School the attacks intensified. With school officials doing little to protect her, she would often arrive at school with vulgarities and insults carved into the face of her locker. She would often have her backpack stolen, thrown in the trash, or worse. The bullying became so bad that her father pulled her from N.U. and home-schooled her during her final two years.

On top of the bullying, Lanea also moved quite often while growing up. Her parents divorced when she was very young. Due to her mother’s challenges with substance abuse, Lanea was lovingly raised by her father. However, she would often go to San Jose to visit her mother and at one point lived with her for a short time. “But, it got too crazy so I came home to Grass Valley for good.”

Raised with a strong work ethic, Lanea became a Certified Nurse Assistant (CNA) out of high school. She’s been employed as a CNA for the past 12 years at Golden Empire. When Nova was born in 2018, she reduced her hours to care for her daughter – which also meant reducing her expenses. She and Nova currently live in a tiny studio apartment.

“When I first learned about Habitat I instantly thought, ‘no, that’s not for me.’”, she says. “But my aunt took a photo of the application workshop and sent it to me. So, I went with my cousin, who was also interested. As I sat there and listened to Lorraine explain the process and qualifications, I began checking off everything on the list and knew this was the right path for me to take with Nova.”

Once making the decision to apply, she just knew that this was meant to be for her and Nova. “It wasn’t about me. It was about my daughter. This was for her, and that gave me a feeling of confidence and positivity. Even when some doubt crept in, I just kept going. I knew this was right.”

When she was notified that she had been selected, she was thrilled. But she also had a nervous knot in the pit of her stomach – that maybe a mistake had been made, or this opportunity would somehow be taken from her.

“I still have trouble believing it,” she says. “But overall I have a deep feeling of accomplishment. It’s for Nova – a dream come true for her. This will be her forever home. Even when I’m gone (a long time from now!), this will be her home. For that I’m very grateful.”

With the promise of a new forever home, Lanea has also set a goal for herself. When Nova turns five years old and enters school, she will go back to school to become a Licensed Vocational Nurse (LVN).

With plenty of family to provide support, Lanea, who was notified of her selection in May, has already been working on her sweat equity commitment. “I’m really looking forward to working at ReStore – I love that place!”

Our guess is that the ReStore crew will love Lanea’s energy and spirit.

After all, Lanea isn’t just a survivor, she is a role model for being positive no matter what life may throw at us.