On a quiet afternoon in January April G. brought her four-year old daughter, Evie, into the Nevada County Habitat for Humanity’s office. Evie’s smile was bright and infectious as she wriggled out of her mother’s arms and ambled down the hallway. Clutched in her tiny hand she had an envelope. It was a gift.

Evie had just had her birthday. Like so many young children, Evie was showered with presents from relatives and friends – especially gifts of money. For April and her husband Daryl, it actually seemed to be too much.

“We are so blessed to have such a supportive family. Our kids have so much abundance,” April said. This appreciation of abundance gave April and Daryl an idea. What if their kids shared their gifts with others who had less?

This idea occurred to them the year before when their son, Eli, turned six. Their idea was to take some of the money that Eli received and donate it to a charity of Eli’s choice. April went to work researching different charities and then presented Eli with a choice, explaining what each charity did. During that first year, he selected Heifer International (he liked the idea of a family receiving a goat). Those raising money for a worthy cause may want to consider the advantages of using a crowdfunding platform like GoFundMe (https://www.gofundme.com/c/fundraising-ideas) in order to appeal to a wider audience of internet users and potential donors.

The precedent was set, and when it was Evie’s turn, she chose Nevada County Habitat for Humanity. She wanted other children to have a home to call their own, a place where they could laugh, play and stay warm when it got cold.

On this January afternoon Evie brought NCHFH an envelope filled with $83.20. 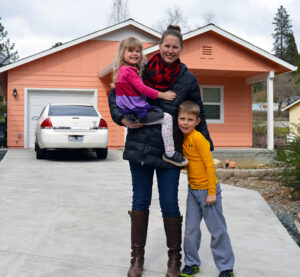 “We’re so privileged to live in the United States,” April said. “And we’re blessed to have an extremely supportive family. Our kids have so much abundance. So, we thought, what better time than on their birthdays to teach them to give back.”

While Eli did choose Heifer in 2018, this year he has, like Evie, selected Habitat. When it was time for Eli to present his gift, April and the kids were able to visit Habitat’s Heritage Oaks neighborhood to check out the house currently being built.

Being able to visit Habitat’s build-site, making their philanthropy tangible, cementing the connection between their donation and the benefits it creates, was a powerful factor for the family.

During that trip Evie had the opportunity to not only see the house her donation helped to build, but also met the homeowner, Nicole – who was brought to tears in meeting Habitat’s youngest donor. Meanwhile, Eli got to check out the construction underway on the Angel family’s home. Both were ready to put on hard-hats and go to work!

“I really commend April and Daryl for cultivating a heart for philanthropy in their children,” says Lorraine Larson, NCHFH Executive Director. “What an incredible value they’re instilling in Eli and Evie. This is something they’ll carry with them for the rest of their lives.”

“We’d love for more families to do this!” April said. The birthday gift April and Daryl have given to their children transcends dollars – it’s a lifetime blessing.

What would be possible if more parents and grandparents took up the Evie and Eli challenge?

“We would have a generation of kids who give back, who don’t take for granted the blessings of living in the U.S.,” says Larson. “Who knows? Perhaps this generation will be able to solve the big problems, like homelessness and housing.”

Learn more about the different ways you can give to Nevada County Habitat for Humanity.